The olive flower is used for its relaxing and calming virtues, bringing a sense of well being as they heal and rejenerate.

Les Fleurs de Bach® Original were developed by Edward Bach, born in 1886, doctor of immunology, bacteriology and homeopathy (1886-1936). He received his medical diploma at the age of 26. During his early career years he worked as an emergency room surgeon. As the years passed he gradually devoted more of this time to observing each patient, noting and carefully checking the many different individual aspects of their pathologies that had brought them to him.

During the first part of the 1930s he shifted his attention to the poor and homeless, seeking a natural solution capable of healing both their physical ailments but also those that were emotionally based. For six years, through his careful observations and his research into the medicinal properties of plants, he perfected a technique to dynamise these properties using solar energy. He reached an apex, discovering a blend of 38 floral quintessences that has since helped thousands of people across the world. Each of these 38 Fleurs de Bach® Original targets a specific emotion and acts gently to regulate emotional states. These preparations are known under the label Fleurs de Bach. It was in the field beside his office at the Bach Centre in Oxford England, that he harvested these flowers that became the foundation of his discoveries. And it is in this same place that the Fleurs de Bach mother tinctures are still prepared by his successors, as determined as he to perpetuate the extraction methods and uses of these flowers pioneered by Edward Bach.

Olive oil is used for its nourishing action on the skin.

The therapeutic virtues of olive oil: Of all extracted oils, olive oil is considered to come closest to the make-up of the oils in human tissues. Olive oil can thus be a regular and important lipid in the diet and on the skin. Its abiity to reinforce the outer skin barrier is widely recognized.

Oleic acid comes from the Latin word oleum meaning oil. This lipid is in the Omega-9 family. It is the most abundant in long-chain, mono-unsaturated fatty acids in our organism. Very nourishing to the skin, it conveys softeness and supplemess as well as brilliance.

Other active ingredients: Olive oil contains 1-2% active anti-oxydants amongst which are:
Composed Phenolic (hydroxytyrosol) : A majority of Phystosterols antioxidants: for healing and repair, to reduce inflamation.
Squalenes : the principal componants on the skin surface, they have emolliant and antioxydant properties. Vitamine E (alpha-tocopherol), Chlorophyl : natural antioxydants 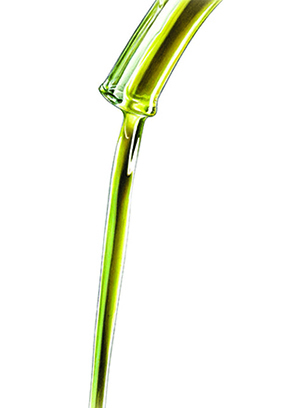 Olive leaf extract is used for its anti-oxidant properties.

This extract is obtained through long maceration and agitation of the leaf in a mixture of water and organic cosmetic glycerine at room temperature. It is then carefully filtered.

The resulting extract is rich in flavonoids and chlorophyl, potent in anti-oxidants.

The olive tree has been cultivated for over 5500 years, for its fruit and for its oil. The trees scientific name, Olea, comes from the word for oil in Ancient Greek. In ancient times, olive leaves were used to disinfect wounds. The olive leaf was considered a potent antiseptic, capable of fighting numerous infections.

Vegetal Olive Squalane is used for its many virtues, amongst the most important of which is to replenish natural skin lipids.

It is the concentrated element of olive oil bar none. Its great advantage lies in its non-greasy texture, enhancing access to the intense virtues of olive oil, deeply moisturizing the skin. Squalane also has the important quality of recreating the lipid layer of the skin, thus protecting the skin from signs of aging. It is a clear and fluid oil with superb affinity to the skins natural oils. Squalane is one of the principal ingredients in humain sebum and is part of the skins own hydro-lipid layer.

It is a multi-function product, spreading on beautifully and penetrating the skin. It prevents drying, and restaures the skins natural suppleness and flexibility.
Its silky-soft and non-greasy texture, added to the fact that it is only beneficial, make it an irreplaceable primary ingredient for our quality skin care emulsions. 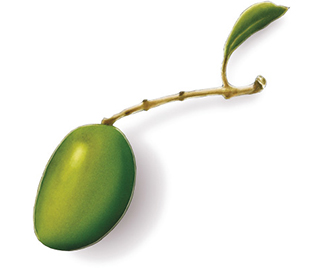